As early as in 1327 the church in Bykle, »Eccl. de Buglum« had been registered in the pope's annals. We do not know when the church was built, but it often took some time before a new church, especially a church located this far north, was registered by the pope. There might have been a church located here as early as in 13th century, or even earlier. The outline of a large burial mound indicates that the church is built on an old, heathen, cultic site.

The first church in Bykle was probably a stave church. Due to the decline in population caused by the Black Death, the maintenance of the church was probably sparse for many generations. After the Reformation it was probably even worse. According to a letter from 1619, Bykle Church »had been deserted for some years«. The same letter stated that the church would be reconstructed and well preserved based on the wish of the congregation and the permission of the bishop. When this work was completed, the priest in Valle would hold services here three times a year.

The present church was built around 1620 and is thus the oldest church in Setesdal. The church is made by notching oval logs together. On the external there is a covering of white boarding. Some of the logs from the old stave church were used when building the new church, among other things, when constructing the ceiling. The church has a small porch, a nave and a chancel, but there is no sacristy. The church is only 11 metres long and one of the smallest churches in Norway.
In the years between 1803 and 1806 the church was thoroughly restored and obtained its present form. Earlier, the church had an independent tower on one of the ends, but it was replaced by the present ridge turret and its bell. The galleries to the west and to the north were most likely also built during this period. Despite extensive restorations during the 1700s-1800s, it is safe to say that the old church in Bykle dates back to 1620.

It is the Norwegian rose paintings (»rosemåling«) from 1826 that make this church so special. The ground colour of the beautiful logs is white, with roses and vines spreading on top. The ceiling is decorated like the sky with stars and clouds. Christ, with his arms raised, looks down from the sky, blessing his congregation. Aslak A. Vasshus from Rauland was in charge of the painting and Knut Åvoldsson Byklum from Bykle assisted him. Traces of old decorations have been revealed, and those might be the original ones. Amongst others, green vine decorations in the chancel and a king on the chancel board are found. The fronts of the galleries are decorated with carved roses (»Olav roses«). These roses are linked to Olav the Holy (Olav den heilage).

The altar and the pulpit are Renaissance works from the first part of the 17th century. The altarpiece has a special design due to its protrusive canopy, similar to the old altarpiece in Valle church, which is now located at the Norwegian Folk Museum (Norsk Folkemuseum). The two large sections portray Jesus carrying the cross and the crucifixion. These paintings date back to the 18th century. Examinations show that these paintings have been painted on top of older motives; motives that might be the original ones.

The pulpit has the same design as the altarpiece and its paintings date back to around 1700. The evangelists Mark, Luke and John are portrayed along with their symbols. As Matthew is missing, the pulpit might have been altered during the restoration in the 1800s.
The baptismal font is made of wood and shaped as an hourglass. It dates back to around 1600. The baptismal dish is made of bronze and origins from the early 1600s. In the chancel, there is a small cabinet on the wall in which the altar books were kept. This cabinet dates back to the early 1600s, whereas its Norwegian rose painting (»rosemåling«) origins from the first part of the 1800s.

Laurits Andersen Undal donated the church bell to the congregation in Bykle in 1683. The bell has the inscription »Si deus pro nobis, quis contra nos«, meaning »If God is for us, who can be against us?« The bell ringer stands in the middle of the aisle, pulling a rope.

Not until 1989, the old church in Bykle got a pipe organ, built by the Swede Nils-Oluf Berg and drawn by Ulf Oldaeus. It is a one-manual pipe organ with five stops. In Bykle the old folk tunes with all their embellishments lived longer than in most other Norwegian congregations.

Welcome to the old church in Bykle, a small piece of jewellery in the history of the church. 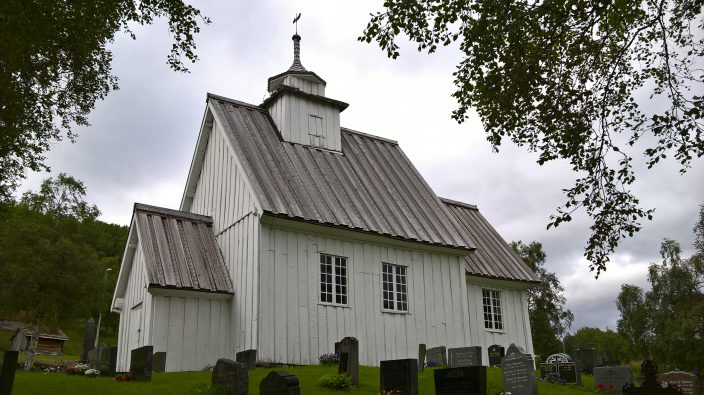 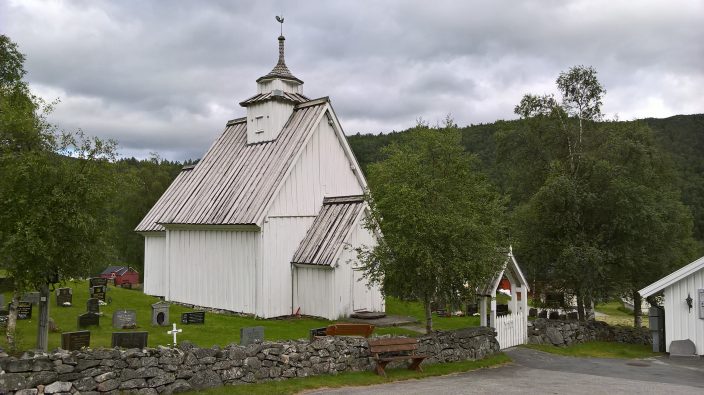 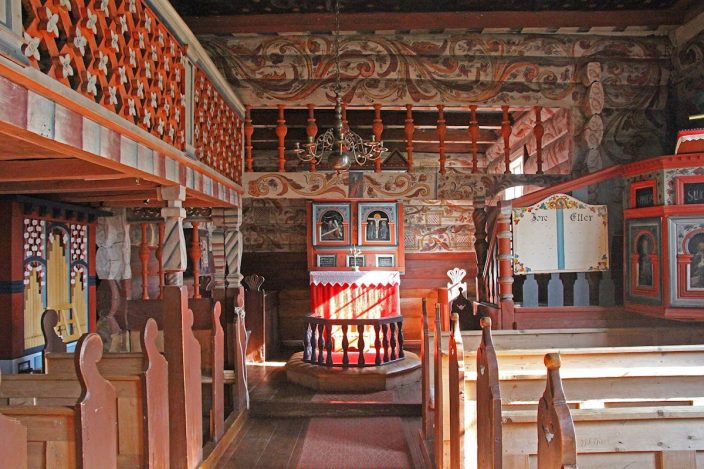 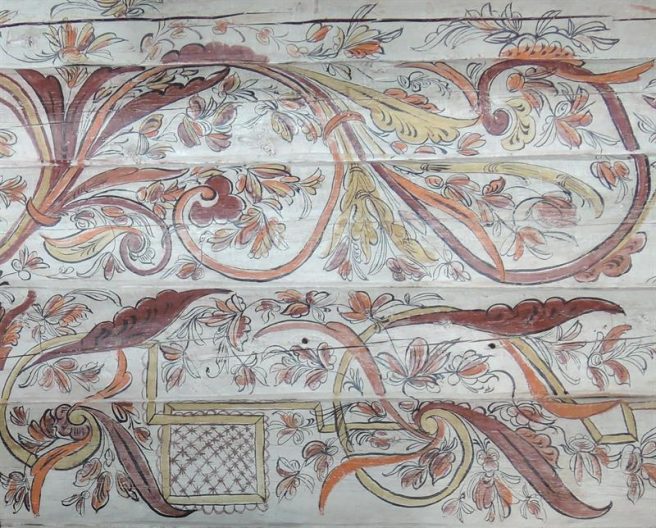 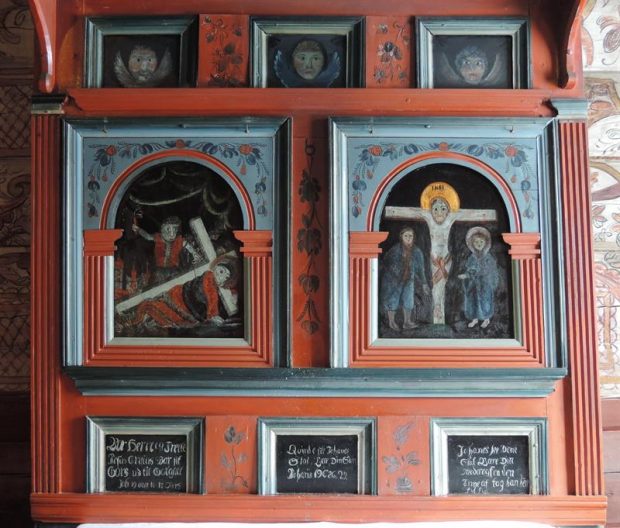 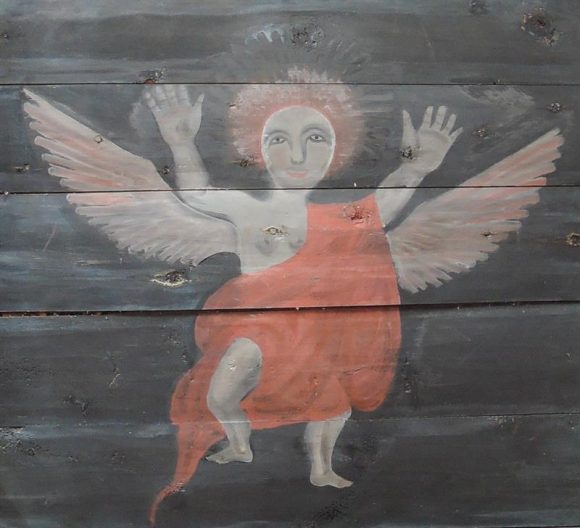 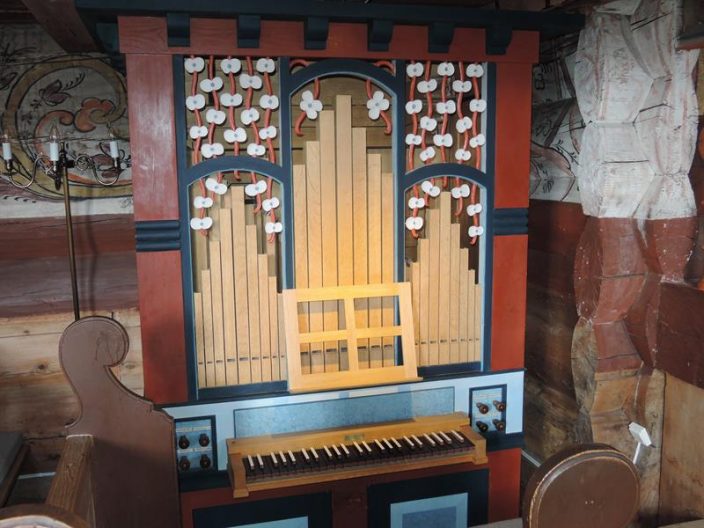 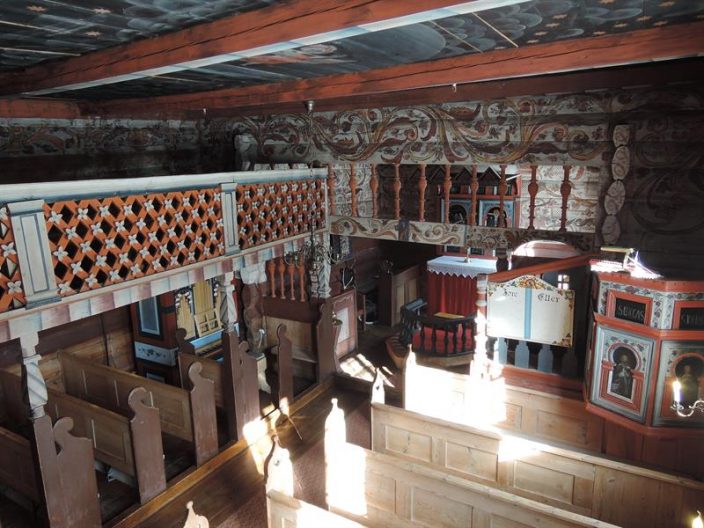 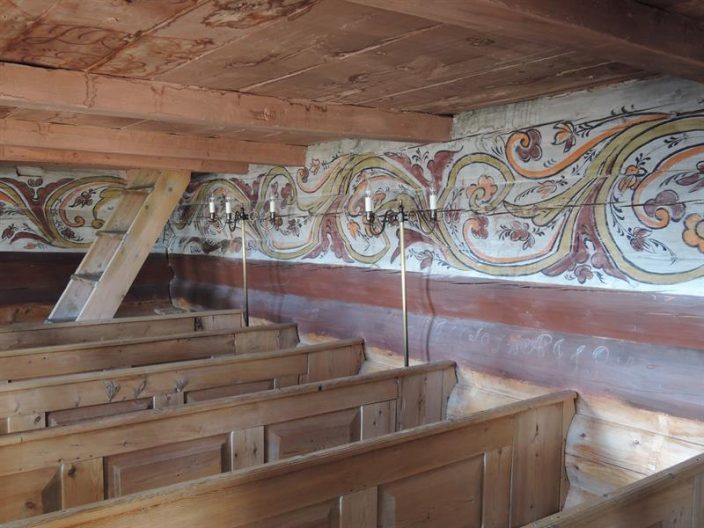 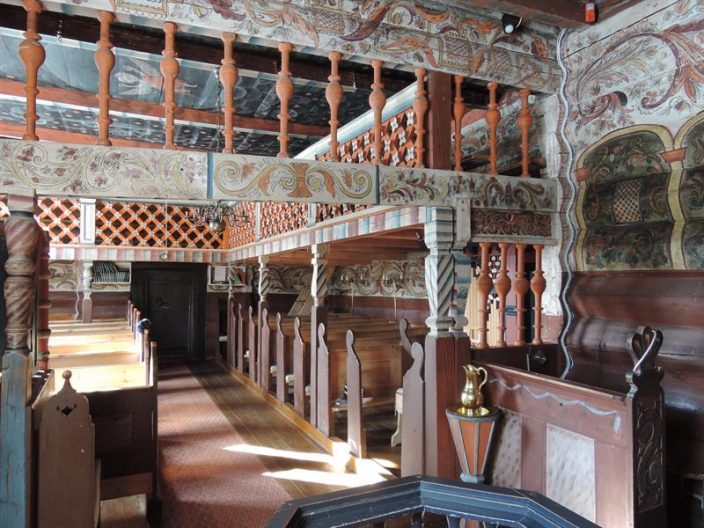 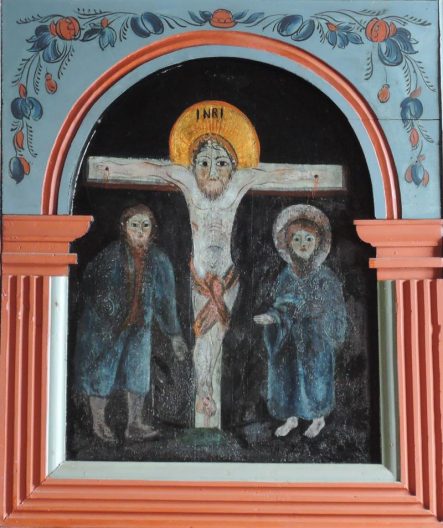 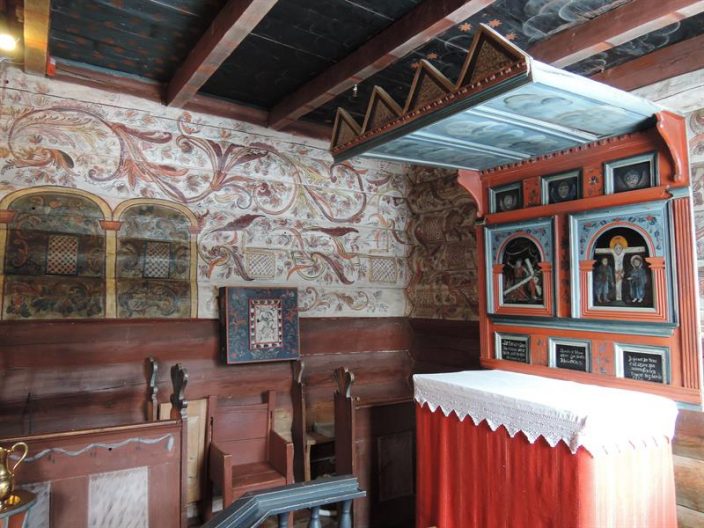 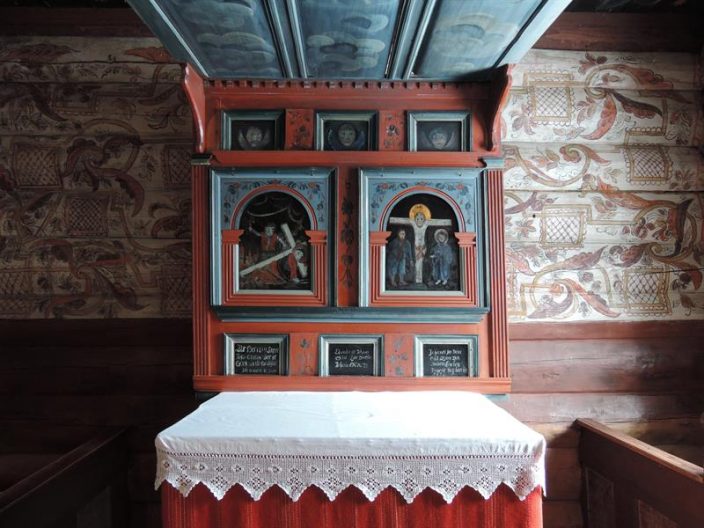 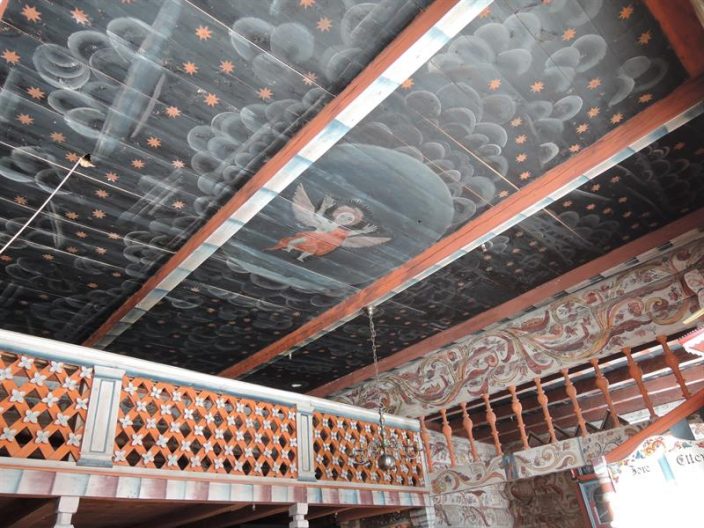 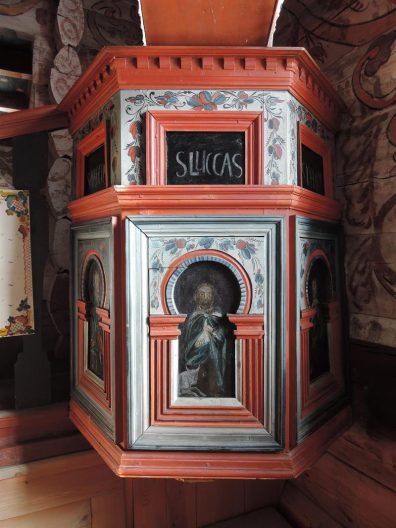 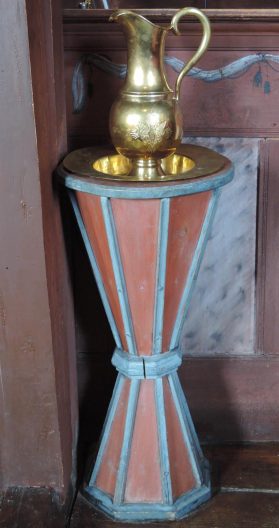